You are here: Home » Blog » Choosing the Best Bike

As you cycle, without even trying, you will improve your mental and physical health, leave no carbon footprint and reduce pollution and congestion in your area. There is also a growing amount of evidence to suggest that cycling or other exercise can reduce fatigue.

So if you have decided to take the plunge and begin cycling, you will need to decide what type of bike to buy. There is a large range of bikes out there, and at least one will suit your needs perfectly. Here is our simple guide to the various types.

You will recognise this bike if you have ever seen a group out training on a Sunday morning, or if you have ever watched a cycling race. If you are simply getting back on your bicycle to get a little exercise, or for the purpose of commuting, then this is probably not the bike for you. If you do become an avid cyclist and you fancy graduating to something faster, then you can always switch to a road bike in the future.

In general, mountain bikes are used for cycling off road — on everything from relatively smooth gravel trails to “extreme” terrain. They feature wide tyres and suspension. Mountain bikes have a large range of gears at a low range to allow for cycling up steep hills. The sitting position is more upright than on road bikes, and may feel more comfortable if you have not been on a bike for some time. It might be worth considering purchasing a mountain bike if you think you may do some cycling on forest paths or other off-road tracks, or if commuting by way of a rough path is an option for you. 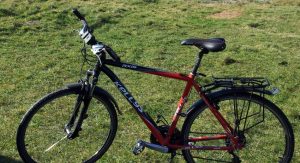 These bikes are like a cross between road and mountain bikes. They have a large range of gears. Their tyres are wider than a road bike but narrower than a mountain bike. The sitting position is more upright than a road bike. They may or may not have front suspension. Hybrid bikes without front suspension are often referred to as urban or city bikes, (which is a little confusing because they are perfect for cycling on rural roads.) Hybrid bikes with front suspension are often referred to as cross bikes, due to their suitability for some off-road cycling.

To get back to cycling after a long break, or for relaxed touring or commuting, hybrid bikes are probably the best choice. To decide whether you need to opt for front suspension or not, ask yourself what type of terrain will you be cycling on. If it is mostly smooth paths or roads, there is no need for the extra cost and weight that comes with front suspension. If, on the other hand, you think you may venture onto rougher terrain once in a while, a front suspension fork is a good option.

These bikes have a very relaxed upright sitting position, by way of their raised handlebars. They have quite large “balloon” tyres. As the name suggests, they are used for “cruising” around. Often they have only one gear — which is fine if you live and cycle in a perfectly flat area. They are also occasionally referred to as beach bikes.

Also known as electric bicycles, pedelecs, or electric assisted bikes. These are bicycles with a motor that give assistance when cycling. They are available as hybrid bikes, mountain bikes and, recently, even high-end road bikes. While expensive, they are a great option for commuting in a hilly or windy area — and are a great option if you want to arrive at work without having to sweat! They also allow bike touring over much greater distances. The most recent e-bike technology will give assistance over ranges up to 150 km on a single battery charge.

As the name suggests, they can be folded — making them very convenient for transportation or storage. Many folding bikes are surprisingly comfortable to cycle. They are a very good option if you have limited storage space or commute by train and bike.

These have a low laid back sitting position. While this may look uncomfortable, recumbent enthusiasts will argue that they are the most comfortable bikes of all.

A version of a road bike suitable for cycling in rough or muddy terrain.

The classic “bicycle built for two”. Tandem bicycles have seats and pedals for two riders, one behind the other.